Fight for your freedom as the leader of the last free band!

Lead the guerrilla war on both sides of the US-Mexico border to keep your freedom. Organize raids and return to safety of mountains. Scout for the signs of enemy, ambush them when favorable, defeat them in the battle or in a duel and loot their livestock, but avoid them when outnumbered. Cover your tracks by traveling in the rocky areas. Manage your water and ammunition supplies, and visit sacred places when in need of the spirit guidance.

Apacheria is my new RPG with elements of strategy and survival simulation. The sequel is planned to come very soon, which is sort of expansion, with more heroes, more stories and different strategy flavors. 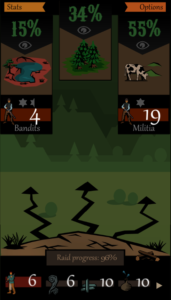